The Bose SoundWear Companion is a beautiful-sounding innovation for personal sound, but this wearable neck speaker is also rather expensive.

We’ve done a thorough comparison of every alternative speaker out there at present, and come up with some perfectly fine and much cheaper speakers that can help quality sound follow you around without blocking your ears.

Just below you’ll find an easy comparison table with drop-down stats and our take on each in a nutshell. Then we’ll dive deeper into our opinions on each, and, as usual, our meta-review on what other audio critics thought of them as well.

This article was originally published on October 10, 2018.

Why Get a Wearable Speaker

For some reason, slapping on large headphones — coffee-cup sized ear sealants — is fashionable, and wearable speaker tech still hasn’t caught on. But we don’t mind being fashion forward (or gloriously out of fashion for that matter).

We’re big fans of both headphones and travel-sized Bluetooth speakers, but there are also some very practical reasons that wearable speakers might be best for some people and situations.

None of these wearable speakers, including even the Bose Soundwear Companion, offer tons of depth and punch in the bass end. For the very best sound and more bass oomph, you’ll want to go with something grander, especially a larger Bluetooth speaker that can fill a large room or outdoor party with sound. Or, in the other direction, go for full-on sealed headphones like the Bose QuietComfort 35 (Series II). Headphones of course also make your sound completely private, which wearable speakers cannot do.

Bose Soundwear Companion Wireless Wearable Speaker...
Check on Amazon
Bose has used a number of its own patented features to create quite a unique product, so even if you find the price a bit much, it’s worth taking into account what they offer.

The tech critics and audiophile reviewers who have listened to the Bose Soundwear Companion have generally lauded its impressive (for its size) sound. There is excellent clarity, detail, and balance in the highs and mids, and, surprisingly for  its size, even bass-focused tracks have some oomph and depth.  Spoken word audiobooks and podcasts sparkle too. For phone calls, the quality is outstanding, including what the mic delivers to those on the other end.

There is a one-inch driver pointed at your ears on each side of the device, but the design also cleverly routes some lower frequencies through the back to give a feeling of more and deeper bass. (This can also make it vibrate a bit, and if this bothers you, you can adjust the bass downwards with the app’s equalizer.)

The SoundWear Companion manages to be comfortable for just about anyone because it can be bent to adjust to whatever feels right. It’s not exactly lightweight at 9.2 oz.(261 g.), but it’s certainly not heavy and after a moment you easily forget that it’s there.

That said, it’s not ideal for running or any other type of workouts that would involve bouncing around a lot, as the speaker will bounce on your shoulders and may even fall off. Joggers should instead see the Zulu or Polk Audio options below.

It is however, IPx4 waterproof, meaning that it can easily withstand sweat or the odd splash (just don’t dunk it underwater). This is important for durability, and should help extend the product life-cycle. 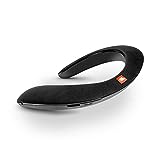 Those who gave the speaker a careful listen generally loved it for pop and other vocals-focused music, but not so much on tracks that required deep, powerful bass. Overall the sound was bright, accurate, and balanced and the highs and mids had good definition. The upper bass was present but not particularly convincing, and the sub-bass was nowhere to be found.

There was no distortion at normal listening volumes, but cranking the speaker up to 70% (a bit uncomfortably loud) produced some distortion in the low end.

The audio focuses on the wearer of the speaker, but as with other wearable speakers, people around you will hear it some. There are two 31 mm drivers (so four total) on each side of the unit, which deliver an impressive surround experience for video games and television. There is also a version of the JBL Soundgear with a BTA transmitter that is intended specifically for connecting to TVs.

The battery life is about half that of the Bose Soundwear Companion, generally getting almost six hours in testing at a comfortable 50% volume. It then takes a bit less than two hours to fully recharge the speaker.

Sony SRSWS1 Wireless RF Wearable Speaker for Home...
Check on Amazon
The Sony Wearable Neck Speaker is not in wide distribution outside of Japan, and as such is a bit overpriced for most of us.

We haven’t tried it nor has it been reviewed by reliable audio critics in the West, but reviewers at Amazon Japan do like it pretty well. It’s an entirely different product that the Bose SoundWear companion in that it lacks Bluetooth but is instead intended to be used with a dedicated 2.4 Ghz transmitter. This means that it is entirely for home use, particularly for television.

It takes three hours to charge and has a seven-hour battery life. Due to its shape and 11.8 oz. (335 g.) weight, it is mainly designed for home use and not outdoor workouts.

Zulu Audio Magnetic Wearable Bluetooth Speakers...
Check on Amazon
Zulu Audio’s contribution to the wearable round-the-neck speaker class is more suitable for outdoor sports like jogging because it can be fastened to clothing by magnets so that it doesn’t bounce uncomfortably. The Zulu Audio Wearable Bluetooth Speakers are two speakers attached via cable that goes around the back of the neck, and the speaker backings are separable magnets that go onto the underside of clothing and hold everything in place.

Critics say that they sound fine for music that emphasizes vocals and that there isn’t much bass to speak of. If you push them uncomfortably loud, you’ll hear some distortion. But since these are particularly intended for outdoor use in situations where you need to be aware of surrounding sound for safety (jogging, biking, skateboarding, etc.), they’re not exactly meant for high fidelity listening.

What they do offer is their light weight, comfort, and IPX4 spashproof-level waterproofing, so a little sweat or drizzle isn’t going to ruin them. The speakerphone works great if you need to take a call while you’re out listening to them.

Polk Audio BITE-A Boom Bit Blue, One Size
Check on Amazon
This is our favorite (and the only recommendable) tiny Bluetooth speaker; it comes in at much cheaper than the other options on this page, and is much smaller and lighter too.

The  Polk Audio Boom Bit is a 34-gram, three-inch ultra-convenient speaker that clips onto your shirt collar or backpack straps and provides quite decent (for its size) sound when you’re out and about. Of course, critics note that it doesn’t provide much in the way of bass, but does have good clarity and definition for its size, and can go plenty loud enough even to be heard in heavy traffic, if, say, you’re on a bike.

Originally Polk claimed IPX7 complete waterproofing, but later retracted this claim. We expect it to stand up to normal sweat, splashes, and light rain, but there are no official claims as such currently. Battery life is only three hours at normal listening volumes and it charges via a standard USB -A plug.

Wrap-Up: What’s the Best Wearable Speaker for You?

JBL Soundgear
The JBL Soundgear is quite similar in design, and still comfortable and offers good sound, in particular by providing a bit of a surround experience. It’s not splashproof however, and it’s a bit heavier.

Zulu Audio
The Zulu Audio Wearable Bluetooth Speakers are the best-sounding option for joggers and other outdoorsy athletic types for whom bouncing would be an issue with the two speakers above.

Polk Audio Boom Bit
And finally, the Polk Audio Boom Bit is the smallest of the lot, and clips onto clothing so it’s also useful for outdoors sports. It’s much cheaper and sounds quite good for its low price and tiny size.