I’ve actually listened to a pair of cheap true wireless earbuds from a rather unknown company — and liked them.

I was not expecting to enjoy any truly wireless earbuds, especially given how big name brands have been reviewed by major critics from tech publications. Apple Airpods connect well but the shape is strange and uncomfortable for many. Bose Soundsport Free don’t go loud and sync with video poorly. The Sony WF-SP700N have clarity and battery issues.

And all of these are fairly expensive and don’t offer anywhere near the sound quality of good wired earbuds and headphones. 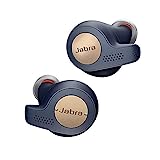 Jabra Elite Active 65t
Overall the consensus from the critics is that the best truly wireless earbuds you can get right now are the Jabra Elite Active 65t. They sound excellent to most people, in part because they come with multiple sizes of gels so that they can get a proper seal with just about any ears. They’re also comfortable, maintain a strong connection and syncing with video, have a five-hour battery, and are IP67-rated waterproof, which means that rain, sweat, and dirt should pose no problem.

But they’re also rather expensive — certainly more than I would be willing to spend on an electronic item that I already know I’m rather prone to lose or accidentally crush in a pocket or backpack.

The Blitzwolf BW-FYE1 True Wireless Headphones were thus something I would at least consider reviewing — although to be honest I wasn’t expecting the best, even though I pretty much liked the Blitzwolf wireless noise-cancelling headphones I reviewed.

I was pleasantly surprised, however.

The Blitzwolf BW-FYE1: Review in a Nutshell

These true wireless headphones work great with no nonsense, sound decent, and are supremely comfortable to wear.

Pros: Capable of getting plenty loud, no syncing or connectivity issues (run on Bluetooth 5.0), and recreate music faithfully; very comfortable, especially if you don’t like the pressure of sealed headphones; splashproof; SUPER cheap

Cons: Don’t create a tight seal and don’t reproduce music as gorgeously, especially compared to sealed and wired headphones; the microphone did not deliver acceptable quality for those whom I called

These are not available on Amazon at present, and instead only through Banggood, a site that might not be well known but has delivered for me and for my readers in the past. (Please do comment if any of you experience issues!)

Features and Comfort of the Blitzwolf BW-FYE1 True Wireless Earbuds

The Blitzwolf BW-FYE1 earbuds have a lot of the same features that have been around in true wireless earbuds from major brands over the last two years. Fortunately the tech has been improving a lot, however, and the prices have dropped too. True wireless earbuds are no longer just a gimmick — they’re really a joy to use.

The earbuds come in a charging box/carrying case that is small enough to fit into a pocket and sturdy enough that you’re very unlikely to damage them by then sitting on it.

Once placed in the box, the earbuds automatically start charging from the box’s battery. The box’s battery can fully recharge the earbuds four times before you’ll need to plug the box itself in to a mini-USB. You likely already have one (or many) USB-mini chargers but if you’re a road warrior who constantly faces strange outlets, I highly recommend this all-in-one travel adapter with both USB-C and regular USB-A out.

The earbuds themselves can play music or podcasts for 2.5-3 hours before needing to head back to the box to recharge (which takes 1-1.5 hours).

The earbuds have a little stabilizing protrusion that keeps them firmly in my ears without the uncomfortable blocked sensation that I often get from completely sealed earphones. The Blitzwolf BW-FYE1 were actually some of the most comfortable earphones I’ve ever worn. They’re the only earbuds that I’ve ever been able to pop in my ears and forget that they’re there.

Pairing between the two earbuds is automatic and initial pairing to my Pixel 2 phone was simple (though the included instructions are printed in incredibly small and annoying type).

Once that is done, using the earbuds is as simple as popping them out of the box and putting them in your ears — usually by the time they get to my ears they’ve already automatically turned themselves on and paired to both each other and to my phone.

One drawback is that they do not take over playing whatever music or podcast is active in my phone once they pair. It was necessary in every case to stop whatever I was listening to before I took the earbuds out of the box, and start it up again once pairing was complete.

Music sounds acceptable for my use. It’s not constrained or distorted as with many other cheap earbuds that I have tried. While there was certainly not a lot of depth, space, or detail, the mix was relatively even and perfectly acceptable for my standards, especially since with such earbuds I’m typically in a noisy environment anyhow.

Talk podcasts sounded clear and the voices were pleasant and easy to follow.

Watching Netflix on my phone also worked great with these earbuds. I didn’t notice any lag or syncing issues as is often the case with other true wireless earbuds.

The earbuds do not create a tight seal on your ear canal, which is generally necessary for truly excellent sound from insertable earbuds. Non-sealing in my opinion is an advantage; I prefer to remain somewhat aware of my surroundings and to not have my ears get all stuffed up with the sealed feeling, which gets tiring after a bit. But others definitely prefer a good seal and these earbuds would not be good for them.

Calling with  the earbuds was completely unacceptable; in the cases where I was able to get the earbuds to actually work with a call, the person on the other end complained that my voice sounded distorted and digitally compressed, and I had to switch to using my phone itself, which in all cases sounded fine.

The Blitzwolf BW-FYE1 are rated IPX4 or “splashproof”, which is relatively good for such cheap earbuds. They should have no issues with rain or sweat.

The earbuds each have a multifunction button that can be used to play or pause, and there is much less lag with this action than with most Bluetooth headphones I’ve tried, perhaps due to the use of Bluetooth 5.0. You long press on the right earbud to skip tracks, and long press on the left one to go back.

Overall I’m left being able to highly recommend the Blitzwolf BW-FYE1 True Wireless Earbuds, as long as you don’t need to use them to make calls and you’re like me a fan of unsealed earbuds. There are plenty of more expensive options out there, but I can’t say they’re worth their much higher comparative prices.