The Bose Portable Home Speaker, released in September of 2019, is just a big bigger and heavier than the Bose Soundlink Revolve+, and looks similar. But it’s important to be aware that the new speaker has a whole different set of features.

The Revolve+ is the largest of Bose’s portable offerings, and was released in April 2017. It has also been the best-sounding and loudest of the Bose portable speakers, and one of the smoothest and clearest 360-degree speakers of its class, period.

Previously Bose has had its portable Bluetooth speakers on one hand and its home speaker systems that definitely couldn’t be lugged around in one hand — there really wasn’t much opportunity for confusion between the two.

But the Revolve+ and the Portable Home Speaker could cause some confusion, so we’ll do a quick side-by-side comparison to help you decide between the two, followed by a roundup of what we and other audio critics have thought about how they sound.

Contrasting the Sound of these Larger Portable Bose Speakers

Bose’s main sonic target for the Bose Portable Home Speaker seems to be indoor home spaces; it excels in small to mid-sized rooms where it can play at medium volumes. It can be placed in the middle of a space and sound equally good to people on any side of it, so you don’t have to be particularly concerned about placement — which you probably won’t be in any case as you carry it about the house by its handle.

The Bose Portable Home Speaker also goes quite loud, much more so than the Bose Soundlink Revolve+ and louder in fact than just about any other speaker of its size and price. Some of those critics felt that it did not, however, sound quite as good as it ought to at these top volumes, saying that it lacked smoothness and control, and a depth to the bass end. We think a better choice for animating loud, outdoor spaces is either the JBL Xtreme 2 or JBL Boombox (though those lack Bose’s smart features).

As for the other Bose speaker, the Bose Soundlink Revolve+ does go plenty loud enough to fill a large living room or provide, say, background music for a patio party, but it’s not going to be heard down at the end of the block like the Bose Portable Home Speaker. Where the Revolve+ excels in the ears of most critics is in providing Bose’s trademark smooth, even mix and balanced sound in a 360-degree speaker. Consumer organizations and internet audio geek websites have been quite uniformly positive on the Revolve+’s detailed, beautiful output.

The Revolve+ offers a surprising amount of clarity and the bass is quite powerful, even overemphasized for some. Particularly impressive is the evenness of the output no matter which side of the speaker you are on.

Critics widely found it to be the best speaker for its particular size, though some balked a bit at its price compared to similar quality, cheaper speakers like those from JBL.

Of the two speakers we’re comparing in this article the Bose Soundlink Revolve+ is the speaker we’d recommend if you’re looking purely for gorgeous sound, and don’t need the shattering volumes or want the smart features of the Bose Portable Home Speaker. But more on those next.

And if you really want to step up from both of those speakers in terms of sound in a compact (but alas not portable and battery-powered) speaker, I absolutely love the sound of Bose’s next step up, the Bose Home Speaker 500.

The main difference between the Bose Portable Home Speaker and the Soundlink Revolve+ is the smart features of the former; it has built in Alexa and Google Assistant.

The Bose Portable Home Speaker has both Google’s and Amazon’s smart assistants built-in, a rarity for smart speakers. You can choose your smartsy universe.

This is rarity for smart speakers; competitors have either Google or Amazon (or Apple’s assistant), but offering both in the same unit is a nice touch. You choose the one you want, likely based on which tech giant’s products you are already more hooked into. (But no, you can’t run both Alexa and Google Assistant at the same time.)

Here’s what you should know about the Bose Portable Home Speaker’s smart assistant features:

The Bose Soundlink Revolve+, on the other hand, does not have smart speaker features, but it does allow you to access your iPhone or Android device’s assistant via the speaker by pressing a button.

Note that you could also pair the Bose Soundlink Revolve+ with a cheaper Amazon Echo product and thus get the best of both worlds (good sound and the latest Alexa assistant). This would work better in a single location in your house however since the Echo is corded; an advantage of the Bose Portable Home Speaker is that you can carry it around anywhere in the house that has WiFi, and give it voice commands.

On this site, to be honest, we range from agnostic to sometimes even hostile on voice assistants; interacting with screens (such as on a smartphone or tablet) for taking care of most things is nicer and more error-free. So this gives us a natural bias toward the Revolve+ in this comparison.

Other Features in Contrast

Shared Advantages and Disadvantages of these Portable Bose Speakers

Both the Bose Portable Home Speaker and the Bose Soundlink Revolve+ share a similar high-end-sonic-bucket aesthetic, and have the following pros and cons in common.

We’ve endeavored to answer some of the most common questions about the Bose Portable Home Speaker here; see also our answers to questions on the Bose Soundlink Revolve+.

Does it support Chromecast Audio?

The Bose Portable Home Speaker does not support Google’s Chromecast. For a similar, very quality portable-ish speaker that does, check out our review of the (highly recommended) the Riva Arena.

Is Bose’s charging cradle worth it?

You definitely do not need the charging cradle, as the Bose Portable Home Speaker comes with both a wall charger and a USB-C power cord. The cradle is just a nicer, slightly easier way to set down your speaker and let it charge.

Our personal take is that Bose is screwing its customers a bit with the separate cradle. It’s a pleasant place to plop down your speaker, but it’s definitely overpriced at about $30. It’s available directly from Bose.

And if you have $30 to blow, instead of getting definitely frivolous electronics, consider donating to cleanup plastic waste instead.

Can I plug it in in other countries?

The Bose Portable Home Speaker comes with a charging plug for the country in which you bought it, and a USB-C cable. 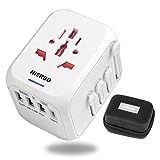 If you want to charge it in another country while travelling (or if you’re buying it on a shopping trip to a generally cheaper country like the United States), also grab a quality plug adapter with USB-C out (we recommend the Nierbo especially).

Can the Bose Portable Home Speaker pair with the Bose Soundlink Revolve+?

Alas, no. The Bose Portable Home Speaker is in the Bose Smart Home family and only pairs with other speakers in that family. And the Bose Soundlink Revolve+ can pair with a second Revolve+ via the Bose Connect app. The two speakers do not pair together.

Wrap-Up: Which Bose Speaker Is Right for You, and Getting the Best Prices

Prices for Bose speakers tend to be very stable over time, but check the links below for both Amazon and direct Bose pricing. Both usually offer free shipping and the same prices though. So hey, you may just want to buy direct from Bose and ever-so-slightly stick it to the corporate monogod.

Bose Soundlink Revolve +
Beautiful clarity and smoothness, warmth, and can pair two of them for stereo via the Bose Connect app
Direct from Bose Check on Amazon