We ran our usual, exhaustive meta-analysis on the new Bose Soundlink Micro Bluetooth speaker, comparing what the best audio critics had to say about it with their comments on the well-known (and quite fêted) other Bose speakers, especially its close cousin the not-quite-as-small Bose Soundlink Color II.

We’ll also share how these stack up against the other Bose Soundlink portable speakers: the Revolve, Revolve +, and Mini II.

We’ll start with a quick side-by-side comparison of the Micro and Color II, then delve into our findings on how they sound and work.

This article was originally published on Nov. 3, 2017. They best-sounding tiny Bluetooth speaker on the market

• Sound: Relatively even across most frequencies, good clarity, some bass especially when placed on a resonant flat surface

Good clarity and even sound, rugged, cheaper, not as loud

Both the Micro and the Color II are durable Bluetooth speakers from a brand known for delivering even mixes and a masterful soundstage in a small package. These speakers live up to that reputation.

Here’s where the Micro and Color II are alike:

As usual with Bose, it delivers best in the mid- to high-range, and doesn’t overdo the bass end.

Ultimate Ears BOOM 2 Portable Waterproof &...
For such a small speaker, there’s great clarity and detail, and even a decent soundstage, offering some placement. (All that said, in our overall opinion on Bluetooth speakers, we noted that the UE Boom 2 is the most loved by critics of about this size; it is also more durable and has now come down in price enough that it easily competes with the Bose Soundlink Color II.)

Bose Soundlink Micro
Check on Amazon
The Bose Soundlink Micro is tiny enough to fit in a coat pocket, and has a cute clip that provides easy attachment to a bike handlebar, a backpack, a lawnchair, anything. It hasn’t yet been tested by consumer testing organizations, but a number of tech sites and audio critics have already weighed in.

They generally feel that the Micro is the best-sounding speaker you can buy in this teensy tiny size. There are lots of other tiny speakers out there, but they tend to sound shrill and have no bass to speak of. The Micro still manages to deliver a version of Bose’s trademark evenness and clarity, and offers some placement of instruments on a soundstage.

The passive radiators can give the bass some oomph, particularly when the speaker is placed on a wooden surface. It’s doesn’t sound as great as the Color II nor does it go as loud, but it can fill a small room and provide for personal listening outside (we’d suggest the Bose Revolves below, or other portable speakers for animating an outdoor bash). 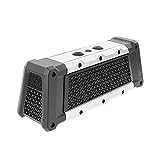 FUGOO Tough 2.0 | Durable & Portable...
Complaints for the Bose Soundlink Micro focused on its relatively short battery life, and it’s true that five hours is less than what is offered by most competing Bluetooth speakers, especially at this price. With 40 hours of juice, speakers like the Fugoo Tough are better for extensive outdoor use over several days. But for most people and situations, we think five hours is plenty.

A more serious criticism is the price tag, which currently lists the Micro at over a hundred bucks. There are other great-sounding small speakers that are much cheaper. But the Micro remains the best-sounding speaker for its teeny-tiny size, so for some people it’ll be worth it. We definitely think it is, but you know, we’re snobs about having great sound in a light, carefree package.

The Bose SoundLink Revolve, the Portable Bluetooth...
The Bose Soundlink Revolve is a superstar in the ears of most critics and is much larger and delivers richer, more satisfying bass than the Micro. We have previously compared it to its even-larger cousin, the Revolve+. Both offer 360-degree sound, meaning they’re meant to be placed in the middle of the action (say, an outdoor party) and sound great from any side.

Bose SoundLink Mini Bluetooth Speaker II (Carbon)
Critics feel that that the Bose Soundlink Mini II is also excellent. It has been around for a while now, is not as durable as the Revolves, nor does it have 360-degree sound, but it does offer a better soundstage. We have also run a full comparison of the Mini II with Bose’s other offerings.
Bose has also introduced a great set of multi-room home Bluetooth speakers that are meant to compete with the likes of Sonos.

Wrap-Up And Where to Buy

Bose Soundlink Color II
Sounds even better, but is a bit bulkier and twice as heavy.
Check on Amazon

Bose Soundlink Mini II
More for inside use and offers a good soundstage.
Check on Amazon

Bose Soundlink Revolve+
This is the bigger, louder sibling to the Revolve
Check on Amazon

Bose pricing is pretty stable and uniform, but you can compare various vendors through the links below.