These are the speakers to consider if you want something small enough to fit into a purse or small backpack that can offer much clearer and louder sound than you’ll get from your phone or laptop’s built-in speakers.

All three of these are excellent options; they offer Bose’s signature balance and careful, detailed delivery. As usual with Bluetooth speakers, the smaller options sacrifice a bit of soundstage, loudness, and bass performance, and the larger you go the more you get in these areas. We’ll describe those sonic differences as well as the feature differences in a nutshell below and then give our full takes and a roundup of what others have had to say.

Finally, if you’re willing to leave the Bose universe and want to hit the road with a speaker that’s durable, about the size of the Revolve II, and that delivers sweet, punchy, very loud sound, check out our travel speaker recommendation here.

This article was first published on March 4, 2022.

The Positives of the Bose Soundlink Micro, Flex, and Revolve II and Key Feature Differences

All three of these are excellent speakers. Here are their positive points in terms of features and how they contrast from each other:

Starting with the smallest of the three, the Bose Soundlink Micro is a bit of a miracle for its size. It offers richness and a satisfying thump in the low end. It of course does not dive as low into the bass end as larger speakers, but placed on a solid surface there is a surprising amount of kick.

The Micro also goes plenty loud enough to be heard outside in somewhat noisy environments and, to the ears of many internet critics and consumer organizations, it is at or quite near the list of best-sounding tiny speakers. Its delivery remains clean and even at top volumes, with only to some ears a hint of loss of composure at the very loudest. There is some sense of separation of instruments though of course this is far from an immersive sound experience.

If you’re willing to go twice as big, the Bose Soundlink Flex is a better performer in all ways. The frequency response remains even but it dives deeper and can create a fuller impression of the bass end. As with the Micro this performance is even better when positioned flat on a resonant surface.

The Flex offers a sweet tone and clarity in the mids and highs and is able to fill a small room with sound fairly well. Unlike some Bluetooth speakers that overly boost certain frequencies (especially bass), critics across the web (all quite positive) say that the Flex delivers richness that is suitable for all genres, including classical and jazz music. 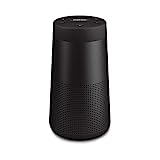 The Bose Soundlink Revolve II is not a lot larger than the Flex but has a different sonic objective. The cylinder is designed to be placed in the middle of a space (especially indoors, where it excels) and throw sound out evenly in all directions. While it won’t sound as great as a full on home stereo system, it’s a reasonable enough replacement for lush, even, detailed production that you can take and place in any room. The evenness of the frequency response is similar, there is again a nice level of detail, and a quite solid impression of bass is delivered particularly when placed on a resonant surface. I very much enjoyed this speaker and though not a lot of other critics have reviewed it, the sound is essentially the same as the old version of the Revolve, which I covered here.

As with other Bose speakers, there is one basic downside to the Bose Soundlink Micro, Flex, and Revolve II; they are on the pricey side. Yes, we think they’re worth it. But we also think given the lowered expectations for portable speakers most sets of ears are satisfied enough with some cheaper options that also sound pretty great.

The other small downsides to note with these ultraportable Bose speakers:

Pricing is generally quite consistent but you can use the links below to check both Amazon in your country and the direct from Bose options.

Some reviewers and users complain that the black versions of these Bose speakers attract visible dust and lint. We find the Flex’s blue option to be particularly pleasing.

My personal favorite: The Flex. Fight it out with me in the comments if you dare.