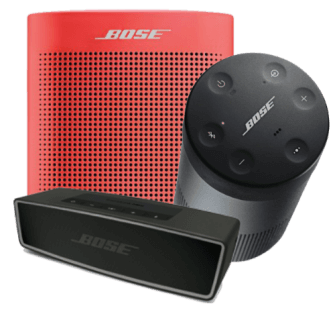 We ran an exhaustive meta-analysis on Bose’s Bluetooth speakers, and what  major European and American consumer organizations had to say about them. We also took into account the commentary from all sorts of audiophile critics and tech bloggers.

We’ll start with a quick side-by-side comparison, then sum up our findings.

• Sound: Full bass (though too much for some tastes), excellent clarity and detail

• 360-degree output: Impressive evenness, sounds the same on any side, meant to be placed in the middle of the party

• Sound: Good clear, detailed “soundstage” for picking out all instruments in a crowded piece of music

• Directional: Sounds best when you’re right in front of the speaker 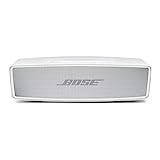 Good clarity and even sound, rugged, cheaper, not as loud

• Sound: Clear, even delivery; above-average sound for its size and price but most critics prefer the other two

• Directional: Sounds best when you’re right in front of the speaker

Critical Meta-Review: How the Bose Soundlink Revolve Beats Out the Mini II and Color II in (Almost) Every Way

Critics’ comparisons of these speakers to each other vary, even to the point of contradictory (see the popdown box below if you want your head to hurt, or skip it if you just want the conclusions).

The Expert Testing Panels and their Array of Wildly Conflicting Opinions

The German consumer testing organization has not yet tested the latest versions of these Bose speakers, the French organization loves the Soundlink Mini II but haven’t tested the other latest Bose speakers, and the Wirecutter prefers the Color II to the first Color, and prefers the Soundlink Mini II to both of them, extolling the clarity of the Mini II. The American organization confusingly gave a better score to the Color II than the Mini II, and complains more about the latter’s lack of volume and sounding “congested”, but the reviewer of the Mini II was perhaps comparing this speaker to much larger wireless speakers. The Mini II does go much louder than the Color II. Finally the testers at the British organization liked what they heard from Bose in 2015, but disliked the 2017 updates; they loved the Soundlink Mini II for its evenness and detail, hated the Color II for its “one-dimensional low note”, calling it much worse than the Color I, which they had quite enjoyed two years prior. They were also disappointed with the Revolve for having too much “boomy” bass. We suspect they may have become more stringent, or else are just in a worse aural mood, in 2017 vs. 2015.

Here are the agreed commonalities of the Bose Soundlink Revolve, Mini II, and Color II:

The Bose SoundLink Revolve, the Portable Bluetooth...
Check on Amazon
And here’s what’s pretty safe to generalize about what various listeners hear as the speakers’ differences. The Bose Soundlink Revolve is the best-sounding of the lot in the ears of most critics; they find it “detailed”, and “expansive”, with “rich bass” (though it’s also slightly over-emphasized bass for some tastes). They are particularly impressed with how it evenly distributes sound at 360 degrees, so it sounds great no matter which side of it you’re standing on (and for the best sound, should be placed on a solid surface, which gives the bass more resonance).

The Revolve is definitely better than the other two speakers for outside use; aside from performing best when placed in the middle of the action, it’s rugged and splash resistant.

Another key point: If you buy two Revolves (now or eventually) you can link them up to create true stereo sound, or else just a bigger party, via the Bose Connect iOS or Android apps.

Bose SoundLink Mini Bluetooth Speaker II (Carbon)
Check on Amazon
Most critics think that the Bose Soundlink Mini II also sounds excellent, delivering one of the most careful, detailed soundstages of any speaker its size. They point out that while the Revolve will better animate a party (sound better to a group when it’s placed in the middle), the Soundlink Mini II sounds better when you’re directly in front of it, giving a sense of “placement” to the various instruments in a complex piece of music. 1Also, some lovely YouTube geeks have made videos allowing you to “listen” to both the Revolve and the Mini II side-by-side, which makes no sense as the Bose speakers’ effect will be lost in the camera mic and in whatever speakers you hear the video over, but in any case these YouTubers observations generally concord with those of other critics. The Mini II might not be as powerful on the bass department, but it’s not skimping on bass either and delivers a powerful low end for such a small speaker.

If you’re looking for great sound that you can use in the corners of various rooms in the house, and take sometimes on trips to use in a hotel room, this is the best Bose to choose.

Bose SoundLink Color II: Portable Bluetooth,...
Check on Amazon
Reviewers generally feel that the cheaper Bose Soundlink Color II is a quality speaker that delivers reasonably good mids and highs for its size and price; it’s a bit more portable but not as powerful or durable as my favorite travel speaker.

Compared to the Bose Soundlink Revolve and Bose Soundlink Mini II, the Bose Color II offers reasonable detail, although it’s a bit harder to pick out all of the instruments in a crowded song, and it doesn’t provide as fulfilling an experience on the bass end. The Color II has a rubberized housing so it’s the most rugged of these three speakers — it’s likely to survive getting knocked off a table and keep playing. It’s also splash resistant.

Bose Soundlink Revolve+
The Bose Soundlink Revolve+ is a larger, more expensive, fantastic-sounding version of the Revolve. As we mention in that review, we think it’s better in every way — but it’s also more expensive and a lot more speaker to lug around. Depending on your tastes, a better upgrade pick might be to buy two Revolves and pair them via the app for a portable stereo experience. Or for a larger, but still portable, speaker for your home you may want to compare the Bose Revolve + with the larger Bose Portable Home speaker.

The JBL Charge 3 or Charge 4 go louder, have better battery life, and are more rugged than these Bose speakers. They’re also generally cheaper.

The Fugoo Sport is practically indestructible and has an insane 40-hour battery, far more than most people actually need.

Bose Soundlink Mini II
Provides a detailed soundstage for such a small speaker, meant for purely inside use
Check on Amazon

Get the Best Deal on Bose Speakers by Checking These Shops

While Bose prices tend to be about the same no matter where you shop, you can check various options for the latest by clicking through here.

Also, using our links to Amazon or other vendors when you buy helps keep our little obsessive research project afloat. Thanks!