The JBL Boombox 2 was released in spring 2020 as as an update to the original portable outdoor party companion, the JBL Boombox.

Both of these are at the larger, and more outdoorsy end of the biggest, loudest portable speakers we’ve reviewed. And they’re expensive. In this article we go through what all reliable critics—not just us—have had to say about the two speakers and whether the upgrade is worth the extra cost.

Update as of July 2022: The original JBL Boombox is no longer available from JBL and is showing up with only a few units left at Amazon USA and only in the “chamo squad” color, at a discount while that lasts.

If that runs out, for a cheaper option than the JBL Boombox 2, and still a very rugged outdoorsy speaker that goes more than loud enough to annoy the neighbors, you will likely want to check out the JBL Xtreme 3. We’ve got a separate full comparison of the JBL Xtreme 3 and Boombox 2 to explain in more detail.

To put things simply, we think that most of you are going to be just fine buying the JBL Boombox instead of its upgrade if you can get it at a reduced price (the links in the table just above go to the best prices we could find for each one). But the JBL Boombox 2 is the better speaker of the two, so if the prices are about the same when you’re reading this, definitely go for the newer one.

The original JBL Boombox sounds lovely; it has an ability to blast powerful, punchy, balanced sound over a wide space, especially outside, on the go. The JBL Boombox 2’s improvements to most hears are very incremental and more apparent at top volumes, which hold a bit steadier and sound fuller.

Reviewers couldn’t agree on whether the mids were over- or under-emphasized, or just fine, but that, in the end, is a matter of taste. They did perceive a full soundscape and and strong clarity and presence across the entire range.

The JBL Boombox has a minor sonic feature that the JBL Boombox 2 lacks, and that is to boost the mids and upper bass a bit with “outdoor mode”. This is a nice-enough feature but the sound profile is already quite suitable for outdoor use, and both speakers get plenty loud to drive the neighbors crazy.

There are plenty of more nuanced options at this size and price, meant more for indoor use.

Yes, these are outdoorsy, party speakers. They’re punchy and dynamic and meant to really be heard and rock out, not provide nuance. Those looking for a more carefully detailed sound profile with better staging indoors might appreciate the Bose Soundlink Revolve or Revolve + that we reviewed, or the slightly larger Bose Portable Home Speaker.

Going even bigger and less portable (you’ll need to plug in a power cable), the Bose options the are at a comparable size to the JBL Boombox 2 are the Bose Smart Home vs SoundTouch speakers.

Why Are These So Flipping Expensive and Are they Worth it?

At the bottom of this review we have links to the cheapest versions we can find of these speakers, with daily updated prices. They go on sale from time to time, but they’re not cheap. And at the time of this writing, there is a $100 difference between the two; if that’s true when you’re reading this, we think you should definitely save and go for the cheaper, original Boombox.

That said, they’re both great speakers and hellsa yes, absolutely worth it. There’s a one-year warranty and JBL is one of the most established speaker brands. These are their hefty, premium party speakers. 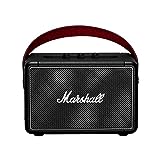 We do have much cheaper large, loud Bluetooth speakers that we highly recommend as well. They’re just as well built, smaller, and not as loud. In particular we like the Marshall Kilburn II.

Which Has Better Battery Life?

Both the JBL Boombox and Boombox 2 are advertised at the same 24-hour battery life but will get significantly less at top volumes. One reviewer claimed that real world battery use was slightly better on the original Boombox at high volumes.

The JBL Boombox 2 has a smaller 10,000 mAh battery vs. 20,000 for the original JBL Boombox, so giving them the same use rating means that JBL has increased the efficiency of the JBL Boombox 2 through updated Bluetooth and other means.

If you buy two JBL Boombox 2s you can pair them together and create one truly monster party soundscape, controlled from the same phone/tablet/computer. The tech that enables this is JBL’s PartyBoost, which is on all of its current speakers.

The same is true if you have two original JBL Boomboxes. The system for that speaker is called JBL Connect+ and it works on previous-generation JBL speakers.

Connect+ and PartyBoost are incompatible and apparently always will be; JBL seems to have no plans to update their firmware on the old speakers for this. That’s a naughty, naughty way to try to get you to buy their newer speaker systems. Fortunately their older speakers are just fine and work well for many years, so there’s no reason for most people to upgrade.

And the Bluetooth Connection?

One would expect the JBL Boombox 2 to more consistently sync better for watching videos thanks to it’s newer Bluetooth version, though we have yet to notice issues with either versions of Bluetooth.

The original JBL Boombox has two USB-out charging ports and the JBL Boombox 2 only has one. Both allow you to charge a device like a phone off of the speaker’s enormous battery. This is an excellent feature in a pinch, though you will need to have a cable for this—most likely a USB-A to USB-C cable for newer devices.

This is a great emergency feature from JBL, but if you’re going to be running out of phone juice away from a power source a lot, just get a separate portable battery.

If you’re going to be DJing an outside bash away from a power source, we think it’s much, much wiser to charge your USB-C computer, phone, or tablet off of a USB-C battery such as this one we recommend. If there was any one simple travel gizmo that tons of people don’t know but should get, it’d be that…

In any case, it’s super sweet of JBL to offer this useful capability, and fine that the number of ports is reduced from two to one—it’s more of an emergency feature than something you’d regularly plan to use.

We definitely recommend going with whichever of these two is cheaper at the time of purchase, and if they’re about the same, go for the newer JBL Boombox 2.

We link to the cheapest colors at the time of our last update, but things change, it’s worth clicking through to Amazon and checking the prices on different color options for both. Sometimes a specific color can come at a huge discount.

JBL Boombox 2
Newer model, but almost exactly the same; slightly improved fullness in bass and smoother performance at top volumes, but only slightly; loses a few very minor features like speakerphone that few use anyway; Bluetooth 5.1 for better syncing with video
Direct from JBL Check on Amazon