We’ve gone all out in our head-to-head comparison of the features and sound of the JBL Charge 3 and the Ultimate Ears Megaboom 3.

These are very similarly sized waterproof portable Bluetooth speakers, they both go quite loud, and they are both consistently at the top of critics’ lists in terms of sound quality.

But as we’ll explain below, the Ultimate Ears Megaboom 3 just barely comes out on top in terms of sound quality. In fact, it’s our overall favorite among the larger waterproof Bluetooth speakers. But the JBL Charge 3 does have a few very convenient features that could make it the better choice for some people — and price matters too.

We’ll start with a nifty little side-by-side table comparison, and then dive further into what we and others think of them.

This article was originally published on October 6, 2018.

A Deeper Dive into the Contrasting Sound and Features

Ultimate Ears MEGABOOM 3 Portable Waterproof...
Check on Amazon
As with our usual meta-ways, we’ve combined our thoughts along with opinions from audiophiles and tech geeks from most major publications. These are both well-loved speakers but there are definite differences.

Ultimate Ears Megaboom 3 Wins Out For its Clarity, Strong Bass, and 360-Degree Sound

Ultimate Ears’ Bluetooth speakers generally do well with the press, and this recent update of its Megaboom is no exception. Audio critics, geeks, and tech sites all came out hard in favor of the Ultimate Ears Megaboom 3 just after its release.

The Megaboom 3 impresses for delivering a lot of clarity and evenness in a relatively portable unit, and the bass is strong and impresses without overpowering. The high end is sweet and clear as well, even at top volumes. The speaker can fill a large room with sound and also animate an outdoor dance party — here it’s helped enormously by its ability to be placed in the middle of the action and sound great from any angle.

That’s because Ultimate Ears continues to refine the 360-degree signature it created for its Boom-series speakers, and this is further perfected in the Megaboom 3.

The JBL Charge 3 doesn’t impress quite as much, but still has been a strong contender in the ears of many critics. It doesn’t “sparkle” in the highs and the mids are “muted” or “muddled” to some. The bass is strong, but for some listeners a little over-emphasized or distorted. But it remains, a couple of years after its release, on quite a few lists of the top larger, rugged Bluetooth speakers.

Both Have the Essential Speaker Features; JBL Charge 3 Has a Few Extras We Like

JBL Charge 3 Waterproof Portable Bluetooth Speaker...
Check on Amazon
Both of these speakers have everything we think that such party-on-the-go, rugged, outdoor speakers need.

The JBL Charge 3 has a couple of features that we really like and that the Megaboom 3 lacks:

And here are the Ultimate Ears Megaboom 3 features that the JBL model lacks:

Overall these feature differences will be of minor concern for most users in most situations.

Ultimate Ears Megaboom 3 vs. JBL Charge 3 Wrap-Up: What’s Best for You? What Are the Best Prices?

We think both units are great, and that the Megaboom 3 is slightly better if you can afford it.

Current pricing is shown in the boxes below and updated daily. But whichever model you’re leaning towards, we strongly recommend that when you click through to Amazon you also check various colors’ pricing; Ultimate Ears speakers can often vary quite a bit in cost according to color. We always try to link to the cheapest color, but things change. 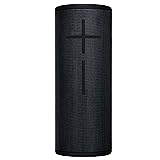 The Key Incremental Upgrades (and Downgrades!) of the JBL Xtreme, Xtreme 2, and Xtreme 3

Which Is Better: JBL or Ultimate Ears? The Bluetooth Speaker Brands Compared