JBL has had some ups and downs in its Charge speaker line, and we haven’t always recommended the newest version when JBL makes an “upgrade”. But the JBL Charge 5 is a suitable, minor improvement over the Charge 4, and depending on your specific feature needs and the pricing at the time you read this, it may be worth it to you to buy the newer model, even if the older one is available at a discount.

We’ll break down the main feature differences in the table below, and then expand on what we and the best critics around the internet have had to say about these two speakers and the differences in how they sound and what they can do.

The (Small) Feature Differences in This Upgrade

The JBL Charge 4 was already a rather recent and very full-featured speaker with USB-C charging; we’d noted the Charge as the rugged speaker with big sound compared to its JBL siblings the Pulse 4 and Flip 5. JBL’s Charge line of speakers has always been about as big and heavy as a bottle of wine, and with a semi-cylindrical shape meant to be placed on its side on its own rubber footing. The focus for the Charge speakers is on great, loud, bass-forward sound in a very portable and durable package.

The JBL Charge 5 continues in this tradition, and is a rather minor upgrade, particularly in terms of features. Here are the key things to know:

Overall either speaker will provide all of the features that one would need and expect from a Bluetooth speaker, and there are no major or concerning differences. We think the biggest advantage of the JBL Charge 4 and 5 over its rivals in price and size from other brands is the possibility to charge your phone or other device off of the speaker’s high-capacity battery. 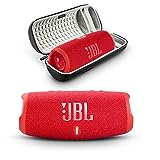 The JBL Charge 4 was often one of the top-rated Bluetooth speakers of its size and price, and the JBL Charge 5’s accolades have been even a bit better. The improvement in sound is a small step up, but perceptible.

The critics and audiophile reviewers who weighed in on the JBL Charge 4 generally laud its even performance and very present and convincing bass end for a speaker of its size. The speaker goes very loud, enough to fill a large and crowded living room, and does so without much distortion. At the very top volumes it doesn’t sound quite as good, but at such volumes careful and complete accuracy is likely not a priority anyway. It offers a sense of soundstage and separation of instruments, and is directional and so sounds best when you’re right in front of it. The bass is impressive but not overbearing and the mids and highs ring out clearly and with good balance.

The JBL Charge 5 is a minor but useful step up in the ears of most critics who have given it a listen thus far. It performs even better at home-rattling top volumes, with very little distortion. The Charge 5’s sound profile is similar to the Charge 4; the bass is present, strong, and prioritized but not unbalanced. While JBL advertises a low-end frequency limit of 60 Hz for the Charge 4 and 65 Hz for the Charge 5, it is the Charge 5 that actually feels like it has a bit more depth and agility on the low end.

As with most JBL speakers, the priority placed on strong bass for the Charge 5 doesn’t mean that the sound is unbalanced. Vocals and guitars ring out clearly and brightly, and there is a richness and some sense of soundstage from this forward-facing speaker. As with the Charge 4, you’ll want to place the Charge 5 on the edge of a gathering of people or facing you directly, as it sounds best from the front. And neither the JBL Charge 4 or 5 has EQ controls in its app—though the built-in balance is fine for most tastes. 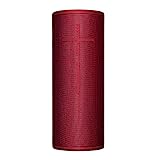 If you’d prefer a full, rounded sound from a 360-degree speaker that you place in the middle of the action and that offers EQ controls, we highly recommend the Ultimate Ears MegaBoom 3 at this size and price. (Here’s a comparison of the JBL Charge 4 and Megaboom 3.) And if you want a smaller JBL speaker, check out our comparison of the Charge’s little siblings the JBL Flip 5 or Flip 6.

And you want even better sound than the JBL Charge 5, but want to stay in the JBL universe of very durable, portable, bass-forward speakers, you could consider the differences between the Charge 5 and the Xtreme 3, or else the next step up between the JBL Xtreme 3 and Boombox 2. But for most people the Charge 5 offers plenty of volume and bass oomph and is a more convenient (and more affordable) way to have good sound on the go.

Wrap-Up: Which Gives You the Right Charge?

We think most people will be just fine with the JBL Charge 4; check the prices below and in particular check the various color options at the links as certain colors are sometimes heavily discounted. If the price difference allows you to afford two Charge 4s and link them together for stereo, or else just one Charge 5, we’d definitely opt for a pair.

That said, the JBL Charge 5 does sound a bit better, especially at top volumes, and for some of you it may be worth a few extra bucks. You can also link two Charge 5s together.

JBL speakers have a tradition of holding up well over time and come with a one-year warranty. That said, if you plan on using the speakers away from power sources, we do not recommend refurbished or used models that you may find available on Amazon or elsewhere, as there is no way to tell how many cycles the battery has already been through, and you could have bad luck and have to keep it plugged in.