Update: While these were fine speakers they’ve been supplanted by newer models. For the latest, see our comparison of the JBL Flip 5 vs Flip 6 and the JBL Charge 4 vs Charge 5.

We’ve run our usual thorough analysis on JBL’s two most convenient and portable Bluetooth speaker options: the JBL Flip 4 and JBL Charge 3. Either are excellent for travel, beach use, patio parties, picnics, camping, etc. Which one is right for you largely comes down to how big of a speaker you’re willing to carry on these adventures; the JBL Charge 3 is a bit bigger and so of course — given the engineering challenges in producing great sound from a small unit — sounds a bit better.

Do note that while we think both of these offerings from JBL are great, our exhaustive mid-sized bluetooth speaker review resulted in the UE Boom 2 being chosen as our overall favorite for the right combination of ruggedness, portability, and great sound. The JBL Flip 4 is a bit cheaper however, and the JBL Charge 3 goes a bit louder, so those may be better for some people. Also, we recognize that tastes for audio profiles of speakers vary, and while JBL’s offerings are not at the very top of critics’ lists, they do have their fervent fans — and we think these speakers deserve their positive press.

We’ll start with a quick comparison of the JBL Charge 3 and JBL Flip 4 and then look in depth at critics’ reactions to both.

• Loud: Good level for indoor use or small outdoor gatherings

• Other: Speakerphone, 3.5 mm aux input, some complaints that it bounces about when placed upright on a flat surface

• Very loud: One of the loudest speakers out there of its size, and gets there with little distortion

• Other: Speakerphone, 3.5 mm aux input, can recharge your phone via USB, rubber base prevents rolling

Critical Reviews of the JBL Flip 4 and JBL Charge 3

As usual, we have taken into account not just our own opinions but the top critical reactions across the board for our comparison.

The JBL Flip 4 is a small, cylinder-shaped speaker that is just a bit bigger than a soda can. It has a 12-hour battery, so it can last long enough for most needs away from an outlet, though a full day of use at top volume would certainly run out its juice.

It has been very well-received in general by reviewers from tech and audiophile publications. They laud its sharp, careful production of sonic detail and relatively convincing bass given its small size. They particularly like it for spoken word. It’s loud enough to be used outside for a small gathering but not for a larger party that really needs to rock.

Consumer organizations and critics from a variety of publications also quite enjoyed the JBL Charge 3. Its cylinder profile is a bit bulkier and heavier, though still certainly conveniently sized for slipping into a backpack on the way to the beach. Since it’s bigger, it’s not surprising that we’ve all found it to sound a bit better. It has fuller bass and is also relatively balanced and detailed. It is one of the loudest portable speakers of its size.

Marshall Kilburn Portable Bluetooth Speaker, Black
Generally critics who listened to the JBL Charge 3 had higher expectations because it is a larger speaker, and so it disappointed some. It was not the top performer in among the largest, loudest portable speakers (that honor goes to the Marshall Kilburn — which we highly recommended.) Also, if you’re looking for a waterproof ultra-durable larger portable speaker, we think that the similarly sized UE MegaBoom sounds better than the JBL Charge 3 (though it costs more too).

The JBL Charge 3 has a significantly longer battery life (20 hours) than the Flip 4 (12 hours), and we love it that you can charge your phone off of the Charge 3’s battery if needed — this is not possible with the Flip 4.

Both the JBL Flip 4 and the JBL Charge 3 have a dedicated JBL app (Apple/Android) that allows you to use two speakers of the same model together to create an impromptu portable full stereo, or just double up in party mode for more sound. (By the way, no, you CANNOT buy one of each speaker and pair them together with the app — since their sound profiles are slightly different this would be an odd thing to do in any case.)

Wrap-Up: Which JBL Speaker Is Right For You?

The choice comes down mainly to how much battery life you need, how much you’re willing to carry, and how much volume you need. 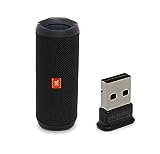 JBL Flip 4
Sounds great for smaller outdoor gatherings and inside use. It weighs a bit over a pound and has a 12-hour battery.
Check on Amazon

JBL Charge 3
Sounds more detailed, has fuller bass, goes much louder, and weighs about 50% more. Its battery can last for 20 hours, and you can also use that battery to charge your phone or other device.
Check on Amazon