We’re entirely reader-supported. Our belabored treatises on the stuff we love are automatically monetized with affiliate links (learn more). As an Amazon Associate, we earn from qualifying purchases. Using such links when you shop doesn’t cost you extra and keeps our research and travel projects going.

The JBL Flip 5 was released August 1, 2019 as an update to the JBL Flip 4 — already one of the better affordable portable Bluetooth speakers out there.

While the Flip 4 was not our very top-choice small Bluetooth speaker for travel, it was near the top of the list, and its lower price can make it a fantastic alternative.

We’ve compiled the critics and consumer organizations takes on it and its predecessor, the JBL Flip 4, into one mega-meta-review comparing the two, to help you decide.

First a comparison chart, and we’ll follow that with our analysis of whether it might be worth getting the new model, or just picking up the older (and cheaper!) Flip 4.

Is the JBL Flip 5 Upgrade Worthwhile?

It’s never a sure thing that an upgrade will sound better than the model that preceded it. This is true for JBL speakers themselves in fact; the JBL Flip 4 was widely seen as an improvement over the Flip 3, but the JBL Charge 3 was often panned by critics for not sounding as good as the model prior, the JBL Charge 2+.

The various audio and tech geeks who have carefully listened to the Flip 4 gave it generally high marks for even performance and strong volume.

The Flip 5 does sound better; in particular it goes louder and has stronger, punchier, and more convincing bass. Vocals stand forward and are prominent, and the high end doesn’t distort, even at top volumes (and it goes incredibly loud for its petite size). The new racetrack audio driver has been revamped to provide crisper definition.

There are various takes so far on the Flip 5 from others. It has been opined that the Flip 5 has excellent, appealing bass but that the clarity is not quite as strong as for example the Bose Revolve or Revolve+ — though those are much more expensive. And one audiophile YouTuber feels however that the vocals snap more on the JBL Flip 4 and that the 4 has a better soundstage than the 5. So far the Flip 5 is considered a great or even best option for its size and price, but we’ll continue to add an overview of critics’ opinions in this space as more come in the next weeks.

Some of the extra speaker power means more battery drain, but the JBL Flip 5 has a much bigger battery to match, at 4800 mAh (compared to the Flip 4’s 3000 mAh). That’s why the overall advertised battery life is the same in the end for both speakers: 12 hours. The Flip 5 can play at its highest volume for 10 hours.

The other obvious difference is the USB-C port on the Flip 5, as opposed to the old, trusty mini USB-B jack that we’re used to on the Flip 4. So it’s a bit more future-proof, and the new port is waterproof and doesn’t need a cover flap as the JBL Flip 4’s mini-USB did. The lack of a flap means one less thing that can break, and the USB-C also means that you’ll be able to use the same charging cable as you do with other such phones and computers purchased in the past year or two.

As for that waterproofing, both the Flip 4 and Flip 5 are IPX7 waterproof, meaning that they can withstand a 30-minute dunking. You shouldn’t listen to them underwater, but if they fall in the pool or sit in the shower with you, it’s not a problem.

Note that the JBL Flip 4 and Flip 5 do not float; for a similar floating speaker in the same price range, go for the excellent Ultimate Ears Wonderboom 2.

The JBL Flip 5 does not have a speakerphone. (It was originally announced to include one, but JBL in the end has not included that feature.) So if you love to make calls through your speaker you’ll have to go for the Flip 4 instead, which does have a speakerphone. In any case, we think generally most people are happier using the speakerphone function directly on your phone, rather than routing calls through a separate speaker.

Like the Flip 4, the Flip 5 comes in a very wide range of colors.

If you’re looking to pair your new speaker with older JBL speakers, note that the technology for doing so has changed. The JBL Flip 4 is compatible with Connect+ speakers, and the JBL Flip 5 is only compatible with the newer JBL standard, PartyBoost, which offers a way to create true stereo on the go. JBL is not expected to release firmware updates to change older Connect+ speakers over to the PartyBoost system.

A Step Up in Sound Quality and Durability: The Ultimate Ears Boom 3

The JBL Flip 4 and 5 are fine speakers, but our very favorite speaker that’s the size of a tall soda can is the Ultimate Ears Boom 3. You can check out my full review and why it’s my top road speaker, but to put it simply, it offers a bit more clarity, the bass is a little deeper, thumpier, and more convincing, and it knocks out 360-degree sound (meaning that it sounds the same no matter which side of it you’re on). I’ve listened to lots of speakers over the years for this site, and the Boom 3 is the one I take with me on my travels.

Like the Flip speakers, the Boom 3 is completely waterproof. And in addition it’s dustproof and a very hardy thing that easily survives drops. You can check out the differences between the Flip 5 and Boom 3 if you’re thinking about shelling out the extra dough. And if you’re tempted, click the link over to Amazon and check prices for various colors; we try to link to the cheapest one but sometimes certain colors are discounted.

Wrap-Up: So What’s Right for You?

There are always newer, greater things on the horizon. Because Bluetooth speakers contain batteries, and all batteries have a limited number of recharges in their lifespans, you’re usually going to have to replace your speaker after 2-5 years. So this is not a decision for life.

The Flip 5 sounds more powerful, crisper, and goes louder thanks to its improved driver, and USB-C charging is a plus if you’re using that for your other devices. If this is worth the extra few bucks, go for it, but the Flip 4 is hardly a bad choice. 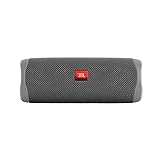