Update: All of these models are now replaced by much newer, better options from the respective manufacturers. Head to our review of the best portable travel speaker for the latest recommendations from Ultimate Ears (formerly UE), JBL, and Bose.

We’ve analyzed everything said by consumer organizations, tech sites, and audiophile bloggers for the three greatest portable Bluetooth speakers out there. These three speakers are all about the size and shape of a tall beer can, and can deliver powerful, balanced, detailed audio for inside use or out in wet, noisy environments like the beach.

Our exhaustive meta-review of all Bluetooth speakers has the UE Boom 2 as our top pick for most uses, but both the Bose Soundlink Revolve and the JBL Flip 4 are also high on the list, and each offers trade-offs that could make one or the other better for some people. So in this article we’ll take a look at their contrasts.

Further on we’ll go into the details of which reviewers felt what about these speakers, but here’s a quick overview of the advantages of each speaker.

• Other: Speakerphone, 3.5 mm aux input, some complaints that it bounces about when placed upright on a flat surface

• Price: This is a recent release and prices may eventually drop — try these links for the latest pricing at Amazon, BestBuy, JBL.

• Excellent sound quality: reviewers across the board noted powerful-but-balanced bass and overall clarity and evenness across all ranges, and loved its 360-degree output

• Ultra-durable: Many report that it survives drops well

• Price: There have been wild price swings for this speaker and pricing can vary a lot according to the color you select; check the latest at Amazon, BestBuy

• Excellent sound quality: Critics found it delivered flawless 360-degree sound and warm even mids and treble, not as much bass as the UE Boom 2 and “struggled” at higher volumes 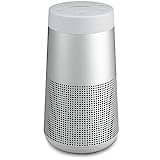 The JBL Flip 4: A Good Portable Outdoor Speaker — and Quite Cheap

JBL Flip 4 Waterproof Portable Bluetooth Speaker -...
Check on Amazon
The JBL Flip 4 is an excellent cheaper speaker; reviewers across the board complimented its ability to deliver crisp details and convincing bass from such a small unit. It can fully project sound through a room and while it isn’t as loud as the other two, it delivers plenty of oomph for a small outdoor gathering. Reviewers feel that it sounds significantly better than its predecessor, the JBL Flip 3, and particularly liked how it handled spoken voices.

That said, when compared it side-to-side with the Bose Soundlink Revolve and the UE Boom 2, the JBL Flip 4 just doesn’t sound quite as good. For some tastes, the treble is a bit over-emphasized, and the bass can only go so low. The advantage is that it’s much cheaper, though we think most listeners will slightly prefer the sound of our other budget suggestions: the Logitech X300 (the best-sounding cheap bluetooth speaker) or the UE Roll 2 (if waterproofing is important). 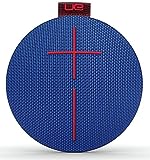 The JBL Flip 4’s speakerphone feature works well and voices both ways sound a bit better when compared to the same feature on an iPhone. It’s fully IPX7 waterproof, which means that it’s durable enough to be dunked and come out fine.

The UE Boom 2: Our Favorite Combination: Excellent Sound, Volume, and Durability for a Decent Price

Ultimate Ears BOOM 2 Portable Waterproof &...
Check on Amazon
We have the UE Boom 2 listed as our top pick for portable bluetooth speaker; we think it has the best balance of sound, price, and features that will please people across the board.

Reviews of the sound quality for the UE Boom 2 consistently put it at or very close to the top of the pack. It has been cited for delivering great bass, and for even, crisp performance across the middle and high end. It’s a bit better suited than the JBL Flip 4 for outside use due to its ability to get quite loud and especially thanks to its 360-degree sound output. The Bose Soundlink Revolve slightly beats it for a completely even 360-degree soundstage, however.

Several critics felt that the UE offers more powerful, convincing bass than the Bose, and in general were happier with how the UE Boom 2 performed at the loudest volumes.

Like the JBL Flip 4, the UE Boom 2 is completely waterproof and can even be dunked underwater without any problem. The UE Boom 2 is well-built and marketed to be able to withstand drops; adventurous users report that it tends to actually survive such abuse just fine. Another factor that will help this speaker last over the long haul is that its battery can be replaced by Logitech for $49 by calling their support line. All speakers’ internal batteries will eventually stop holding their charge after a couple of years; having the option of battery replacement better protects your investment.

Like Bose and JBL, UE offers an app that lets you pair together multiple units and create full stereo, or you can just double up the sound to further amplify the party.

We’ve previously compared the UE Boom 2 to its squatter, bassier sister the Wonderboom, and to the cheaper disk UE Roll 2, and finally to its heavier larger cousin the UE Megaboom. But the UE Boom 2 remains our overall favorite from UE’s Logitech.

The Bose Soundlink Revolve: Premium Sound (and Price), Not as Outdoorsy

The Bose SoundLink Revolve, the Portable Bluetooth...
Check on Amazon
The Bose Soundlink Revolve is the most premium of these three speakers; it costs a bit more, but reviewers generally feel that it’s one of the better-sounding speakers of its class. They praise its detail and warmth in the mid and high ends, and its rich bass (though they generally feel that UE’s bass performance is better). It’s not going to sound quite as good as a wireless home system like the Sonos, but it’s close, and a good alternative if you want something more portable.

The Bose Soundlink Revolve’s great, even 360-degree sound was generally found to be even slightly better than that of the UE Boom 2; it’s designed to be taken out and placed it in the middle of the party. It’s worth noting, however, that for the price of a single Revolve you are now nearly able to get two UE Boom 2’s, which could form a stereo pair and and much bigger, more convincing sound than a single speaker.

Unlike the Boom 2, you’ll need to take a bit of care with the Revolve; it’s only splash-resistant (not waterproof) and not built to survive as much abuse in terms of drops and dirt. It’s also heavier than the Boom 2, so perhaps not something you’re as likely to slip into a purse or a backpack just in case you want to launch a dance party.

Bose SoundLink Revolve+ Portable and Long-Lasting...
If you want to take a (significantly) greater step up in terms of price and weight, you can get even more sound, battery life, and bass oomph from the Bose Soundlink Revolve+.

Wrap-Up: And the Best Speaker For You Is…

These are three great speakers, but eventually, one must make choices…

JBL Flip 4
The cheapest of the three, and has great sound and battery life. You’re sacrificing a bit on bass and clarity, but not much. It’s waterproof.
Check on Amazon

UE Boom 2
Durable and waterproof, it delivers fantastic, detailed 360-degree sound and is our top pick overall for this category. Its gotten nearly universal praise from other critics too.
Check on Amazon

Bose Soundlink Revolve
Good choice for those who value a beautiful, natural mix and who don’t mind the higher price and carrying a bit of extra weight.
Check on Amazon