We’re entirely reader-supported. Our belabored treatises on the stuff we love are automatically monetized with affiliate links (learn more). Using such links when you shop doesn’t cost you extra and keeps our research and travel projects going. Thanks dears.

Not all Bluetooth speakers actually improve in their new additions — though most do. We’re excited to take a peek at the JBL Pulse 4 and see if it’s a worthy follow-up to the Pulse 3.

With the JBL Pulse 4, JBL kept what was working really well with the Pulse 3 — the trippy, music-coordinated light show, and made it even better.

In the Pulse 4, the glass LED screen that smartly and dynamically dances to your tunes now takes up the entire body of the speaker. There are plastic caps at each end, which give the impression that if you could yank them off, your bottled lightning would shoot around the room, and perhaps offer to grant you a wish.

As with the Pulse 3, on the Pulse 4 you can choose colors and adjust the types of lightshow via a smartphone app. An additional feature on the Pulse 4 is the ability to shake the speaker and have it pair with another Pulse 4 (or JBL PartyBoost-enabled speaker) that is nearby. This is possible on the Pulse 3 with other JBL Connect+ speakers, but needs to be set up in the app.

The Pulse 4 also uses the light show as a volume indicator, giving you visual feedback with the way the speaker is lighting up about how loud you’re going.

Here’s a look at the 360-degree light show from the JBL Pulse 4. Truly impressive, we think, a nice step up from your granpappy’s lava lamp.

As for sound, JBL appears to be doing something similar as with its Charge 3 to Charge 4 upgrade; it is reducing the number of transducers to one while attempting to keep the same basic sonic profile. Audio critic reviews have so far complemented the JBL Pulse 4’s neutral mix across all frequencies, the solid bass performance (including even sub-bass), the powerful room-filling sound at high volumes, and the even 360-degree performance. There is some surprise that a speaker whose main feature is a bit of a gimmick — a light show — is also a truly beautiful-sounding piece that can animate a hell of a party.

There are other small changes. Not all are improvements; several very minor features are actually lost in the move from the Pulse 3 to Pulse 4. Here’s the rundown of what’s different:

Pros and Cons of the JBL Pulse 4

Other advantages of the JBL Pulse 4

Disadvantages of the JBL Pulse 4

Wrap-Up: And the Best Light-Show Speaker Is…

While we’re ardent environmentalists around here, we do not recommend buying a used or refurbished Bluetooth speaker, as there is no telling how many cycles the battery has already been through. So watch out for that if ordering the Pulse 3 (we only link to the new versions of both). 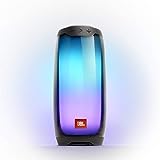 JBL Pulse 4
Sounds great and gives the LED screen that smartly and dynamically dances to your tunes
$199.95
Direct from JBL Check on Amazon 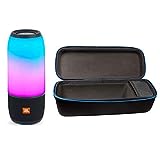