Note: This article covers a previous-model speaker: The Xtreme 2. For a comparison of the latest from JBL, check out our review of the JBL Xtreme 3 vs JBL Boombox 2.

The JBL Xtreme 2 and JBL Boombox 2 can look quite a bit alike, especially if you’re just glancing at online photos of the two and mulling over which to buy.

But while they share a similar esthetic and features, they’re quite a different experience to actually use. The JBL Boombox 2 measures about twice as much as the JBL Xtreme 2 in any dimension, and weighs more than its double, so you’re making a commitment to lug around a bit of a beast. But in return, you’re also getting even more monster sound from the JBL Boombox 2, especially in terms of loudness and full bass delivery.

We love both of these speakers; they’re not quite as refined as the main larger Bluetooth speakers we recommend, but they deliver more oomph and are excellent choices for outdoor parties. Here’s a full breakdown of their differences.

This article was originally published on January 9, 2019. That article discussed the original JBL Boombox however. We overhauled this article to discuss the new JBL Boombox 2 on June 15, 2020. On May 31, 2021 we added a link to our new article covering the Xtreme 3 at the top.

As is almost always true in the speaker world, bigger and heavier also means better sound and more convincing bass. So the questions facing you are: 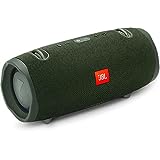 The JBL Xtreme 2 has received excellent feedback from tech and audiophile nerds, particularly for its ability to get quite loud and deliver strong bass without distorting. It’s not as subtle and refined as the Marshall Kilburn II; it’s an outdoor party speaker and not really the speaker you’d want for mainly indoors use. It is, as we’ve reported before, a solid step up in sound compared to the original JBL Xtreme. Perhaps it’s heavy on the bass end, but that’s a blessing for rocking out outside, where you want the bass to be able to carry a bit. It goes more than loud enough to get a crowd of 20-30 people dancing. I’ve seen it do so outdoors, and I’m pretty sure we were nowhere near top volume.

In terms of features, the JBL Xtreme 2 delivers just about anything you could want from an outdoor speaker, plus even some features we find a bit extraneous (speakerphone! speakerphone! why is this still a thing?). It’s a fully waterproof, durable cylinder with a carry-strap that features a built-in bottle opener, and an extreme 15-hour battery life. The stereo mini input probably won’t get a lot of use, but it’s a thoughtful feature for connecting older devices; I’ve for example enjoyed the ability to be able to connect an old iPod during a party, and not have the tunes get interrupted if someone should call my phone. The ability to charge USB-devices off of the speaker battery can certainly be a lifesaver (though we also recommend just getting a portable USB battery).

The JBL Boombox 2 is, as its name suggests, a deliberate throwback to the days of cassette tapes, and the devices we’d lug around to play them. But this speaker itself is much more modern and powerful, with a huge sound in what is still a relatively portable package; you can certainly lift and carry it in one hand.

Its sound profile is similar to that of the JBL Xtreme 2, but it’s capable of going even louder and sounding great doing so. The JBL Boombox’s 2 smarter critics were quite quite uniform in their praise of its ability to hold steady and not distort while blasting sound over a wide radius. The JBL Boombox 2 is a slight improvement over the original JBL Boombox (see that link for our thoughts on the cheaper, and still quite good, older version). The Boombox 2 a bit overkill for an inside speaker, where you’d want a more refined setup anyway, but great for delivering good quality and relative evenness in an outdoor setting. Bass tends to fall away, especially with distance, when you’re playing music outside, so this speaker’s emphasis on the bass end actually makes it quite useful for that use.

There isn’t as much separation of instruments as with quality bookshelf speakers, but the JBL Boombox 2 is the closest thing you can get to sounding like you have a portable subwoofer in a durable package you can take anywhere. If you’re looking for a purely home setup at about the same size, without the battery, check out the Bose Home Speaker or Soundtouch offerings.

The JBL Boombox’s 2 feature set is nearly identical to that of the Xtreme 2. There’s the full IPX7 waterproofing, the mini-in jack, and a carry handle (instead of a strap). Both the JBL Boombox 2 and Xtreme 2 also have a USB charging port for charging external devices off of the speaker’s battery. And the battery life is even longer, at a truly ridonculous 24 hours. Presumably you’re, ahem, “on something” if the party is going for that long.

The Xtreme 2 has JBL Connect+, which allows you to pair it to any other speaker with this same feature for bigger sound. Setup is as simple as touching the Connect+ buttons on each speaker. The Boombox 2 has the newer PartyBoost standard, which allows you to do the same, but only with other PartyBoost speakers. The newer PartyBoost is incompatible with the older Connect+, and because corporations are evil monsters out to get us, no firmware update is planned. On the other hand, either speaker is really more than enough on its own; you don’t need two.

Neither the Xtreme 2 nor the Boombox 2 is small enough to slip in a suitcase or backpack while you’re headed to far-off lands — if that’s your goal check out our roundup of the best portable speakers for travel.

… well, both are fine choices, depending on your budget and what you’re willing to lug around.

JBL Xtreme 2
More portable, but still a solid unit with monster sound, ready for the outdoors
Check on Amazon

JBL Boombox 2
Twice as big, twice as heavy, very loud, and subwoofer-ish delivery for the beach or jungle
Check on Amazon

Incidentally, both of these come in “camouflage” coloring. If some reader could please tell me what the hell is the point of a camouflage speaker, I’d love it. These suckers make noise, that’s the whole point, they’re hardly meant to stay hidden from wild beasts/enemies.

The Xtreme 3 vs JBL Boombox 2: Choose the Right Size for Your Outdoor Party