The JBL Xtreme, Xtreme 2, and Xtreme 3 speakers offer an excellent, portable, rugged route to serious bass oomph and to getting a quite loud outdoor party going.

This series has long been a favorite in terms of ruggedness among the largest, loudest Bluetooth speakers we review; we think that for people who party a lot outdoors and who listen to bass-heavy music, the JBL Xtreme speakers are an excellent portable option. They doesn’t distort at high volumes and the bass can carries enough to be felt and get you moving, even in places with a lot of noise.

The JBL Xtreme 2 was a slight step up from the original JBL Xtreme, and the JBL Xtreme 3, as we’ll explain here, continues to make minor improvements—but it also loses a couple of things.

An Overview of JBL’s Updates for the Xtreme Lineup in Terms of Sound: Incrementally Improved Loudness and Bass

In each successive upgrade, JBL apparently took what was already going well for with its Xtreme speakers and made those areas even stronger, rather than changing course or trying something new. For those who want a large-but-still-portable, rough-and-tumble outdoorsy speaker with great emphasis and power on the bass end, this is good news.

JBL Xtreme
The JBL Xtreme (original)  was celebrated by critics for going quite loud and getting surprisingly strong bass in a portable unit that is convenient for tailgating, picnics, and a drive to the beach, but too big to be a speaker you’d pack for travelling. That said, to some ears it was a bit too much on the bass end, and the high end could get a bit overtaken by the mids and sound somewhat harsh. But it went impressively loud, and sounded relatively great with little distortion at top volumes. 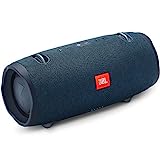 JBL Xtreme 2
The JBL Xtreme 2 keeps this basic approach to a sound profile and got a similar response from critics, who found it a solid improvement. The bass goes even deeper than the original Xtreme and has more dynamism and detail. The volume is about the same—just a smidge louder—but mainly there is better performance at top volumes with less distortion.

JBL Xtreme 3
The JBL Xtreme 3 again makes small improvements in the ears of the first YouTube critics, gaining a slightly deeper, fuller, more rounded bass than the Xtreme 2, and again, going just a decibel or two louder. The high end is more pronounced, which can add clarity, especially outside, but to some ears sound a bit piercing at the very top volumes when inside. Though the difference is small, to some the JBL Xtreme 2 thus seems a bit warmer than the Xtreme 3. The Xtreme 3 doesn’t need to boost its bass as much as the previous two Xtreme speakers, as it naturally has a slightly deeper and more present bass end in its mix.

As for more recent audiophile takes, PC Mag’s reviewer shares the view of many in summing up that Xtreme 3 isn’t “a sound signature for purists, but those seeking some powerful bass depth from a portable speaker will not be disappointed.” The takeaways from most reviewers are that the bass kicks out an impressive, satisfying thump and yet is not overbearing—there’s still an even mix and decent (if somewhat narrow) stereo soundstage from its left and right channels. And while it’s an improvement, most wouldn’t bother upgrading if they had the Xtreme or Xtreme 2.

We think generally that the JBL Xtreme speakers don’t sound as refined or carefully mixed as similar competitors from other brands that we recommend, like the Marshall Kilburn II or Ultimate Ears Megaboom 3, but they do go louder and most listeners will find that any JBL Xtreme speaker is fabulous for party use, particularly if paired with a second of the same speaker more soundstage and volume.

My experience using the Xtreme 2 to animate outdoor dance parties like that pictured up top is fenomenal. It’s hard to find a speaker whose bass carries so well and offers such a complete sound profile in a compact unit. The Brazilian melodies were lively due to the crisp delivery of intricate cavaquinho work and vocals were full and balanced. The thump of large zabumba drum kept our dancers alive.

Feature Differences Between the JBL Xtreme, Xtreme 2, and Xtreme 3

In terms of features, JBL again chose to focus on its strengths and make just minor changes to the Xtreme 2 and then Xtreme 3.

We get it, we’re cheap, and we’re the last ones to recommend always buying the latest thing. Check the prices for each of the models below and particularly the different colors available at each link—sometimes there are unexpected discounts.

For our money, if there’s more than a $50 difference at the moment you’re shopping, we’d recommend you go for the cheaper model, as the sound differences are barely noticeable to most, and only when you have the speakers side-by-side.

But a caveat: Note that with Bluetooth speakers we generally don’t recommend getting used, “renewed” or refurbished models as it’s impossible to know how many cycles the battery has already been through, and thus how long the speaker’s battery will last. This is particularly important for speakers like these whose main use would be outside.

JBL Xtreme 3
Same as the Xtreme 2 but goes slightly louder, has even a bit deeper, fuller bass, and boosts the highs a bit; fully IP67 waterproof and dustproof; no speakerphone
Check on Amazon 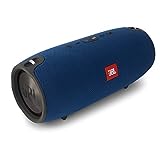