We’re entirely reader-supported. Our belabored treatises on the stuff we love are automatically monetized with affiliate links (learn more). As an Amazon Associate, we earn from qualifying purchases. Using such links when you shop doesn’t cost you extra and keeps our research and travel projects going.

Would the new Stockwell II be worth upgrading to? Should you get the old Stockwell if the price drops for clearance?

We’ll cover all that below, but first, a quick side-by-side rundown of our take and the differences.

Critical Meta-Review: How the Marshall Stockwell II Sounds Compared to its Predecessor

On paper, the Marshall Stockwell II can actually seem like a bit of a downgrade from the Stockwell I. Just look at the feature changes:

But features don’t tell the whole story. Speakers don’t need to do much more than sound great, after all. The feature differences above will be incidental for most users, we think.

The original Marshall Stockwell I got some generally good reviews from critics and consumer organizations, who especially emphasized its enormous power and loudness for a small-sized speaker. Some found the sound full and clear, but a number complained also of distortion at highest volumes, and not everyone loved the sound or felt that it was worth the price.

Speaker obsessives and tech reviewers have thus far given the Stockwell II much higher marks overall. In fact one who thought that the original Stockwell sounded “just horrible” felt that the upgraded Stockwell II is the best portable speaker of 2019, as it has a totally different type of sound.

The Stockwell II does what Marshall calls multidirectional stereo; the left and right channels are pointed slightly differently and mixed in such a way as to enhance a feeling of immersion and stereo sound from such a small unit. It can sound great outside, but even better in a room placed not too far from a corner or a wall, to give a little more oomph to the bass coming out the back of the speaker.

But the multidirectionality of the Stockwell II also works well; place it in the middle of a party and it will sound relatively good and even no matter which side of it you’re standing on.

The Stockwell II is not the best speaker for loudness (that would be larger, louder speakers) but it does go plenty loud enough to fill a mid-sized interior space, and can even do a pretty good job in a large space.

Both the original and upgraded Stockwell have actual analog knobs that allow you to adjust the volume, bass, and treble directly on the speaker. This is actually a quite useful and pleasant feature; no digging into the app on your phone to find equalizer settings. It can allow for real-world on-the-fly adjustments that make the listening experience better and smoother.

Neither Stockwell speaker is truly travel-friendly in terms of portability; we think 2.65-3 kilos is too heavy to take in a carry-on and have space for much else. If you’d prefer something more compact and lighter, check out our favorite travel speaker recommendations. Those are also generally a bit cheaper as well, if the price of the Stockwells is a concern.

Wrap-Up: Which Small Marshall Stockwell Is Right for You?

Prices can swing a bit on these Marshall speakers, click through at the links and check different options there for the latest.

Marshall Stockwell
Because of the complaints about clarity and distortion at top volumes, we wouldn’t recommend the original version of this speaker unless it were to significantly drop in price, say below $50.
Check on Amazon 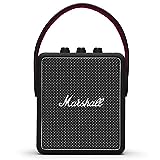 Marshall Stockwell II
A vast improvement in terms of clarity, evenness, and multidirectional stereo. The best-sounding speaker of its size and price.
$198.00
Direct from Marshall Check on Amazon