This article covers an old version of the Megaboom.

Want to be up to date? Head instead over to our full comparison of the new Megaboom 3 vs the Megablast.

The old Megaboom is still great (we compare the original Megaboom to the Megaboom 3 here), so we’re leaving this article up for those who are considering getting the old model, which is sometimes still available on Amazon (also refurbished on Amazon) for a good price.

Both speakers are excellent portable outdoor options; frequently people want to know which has better bass, which is louder, which sounds better, and if the small price premium of the Alexa-powered MegaBlast is worth it.

We’ll go into the details below, but our overall view is that Ultimate Ears Megablast is a slightly better speaker, though not by much. We’re not super crazy about smart speaker tech in general at this point, and originally felt that it wasn’t worth the price premium, but since the Ultimate Ears Megablast's price has been coming down on Amazon as of summer 2018 by quite a bit, it may now be worth it to go for the smart speaker.

But as you’ll see there are still a few advantages to the UE Megaboom, and in our category of loud Bluetooth speakers, it’s still overall the best speaker for the money in our opinion.

This article was originally published on January 22, 2018. June 22, 2018: An overhaul of this article especially given how changed prices affect our thinking; the Megablast is becoming a better deal than it once was. July 27, 2018: Updated some information on smart features and fixed formatting. Oct. 1 2018: We’re working on an update to cover the Ultimate Ears Megaboom 3.

What Critics Say: The MegaBlast vs. the MegaBoom

Ultimate Ears MEGABOOM (2015) Portable Waterproof...
Check on Amazon
As you might guess from the “Mega” in the names, these speakers are a bit heftier than the small to mid-sized portable Bluetooth speakers that we recommend (the ones that you can just toss in a handbag or picnic basic without a thought to extra weight). But as usual with speakers, there is a tradeoff between size/weight and sound performance — bigger speakers almost always sound better. The UE Megablast and Megaboom fall into our larger category and do sound better than the smaller speakers we also review.

They’re also both designed to take quite a bit of road abuse. Both have IP waterproof ratings of 7, meaning that than can be submerged underwater for up to 30 minutes with no ill effects. The MegaBlast also has a fully dustproof rating, meaning that it is designed to withstand grime, though the fully waterproof MegaBoom is unlikely to let in much dirt either. Customers on Amazon USA report that their MegaBooms and UE Megablast have withstood lots of abuse in terms of drops and rough handling, typically being toppled from a table to a hard floor without issue.

We bring this up first because this durability is their major advantage; we recommend other large Bluetooth speakers  that are slightly less durable, especially the Marshall Kilburn, if the issue is simply sound quality. (Here’s our comparison of the Marshall Kilburn and the UE Megaboom.)

But in the ears of most critics, tech sites, and consumer testing organizations, the UE Megaboom is a fantastic-sounding speaker — at or near the top of rankings for its size and price. As usual with Ultimate Ears, it delivers an even mix and offers gorgeous detail, warmth and solid, satisfying bass in a portable package. And it’s not just durable enough to go anywhere, it’s loud enough to be heard over crashing waves or a noisy, crowded patio party.

The critical reaction from similar audiophiles and techies to UE’s newer smart speaker, the UE Megablast, is also highly positive. Those that have compared the two found the MegaBlast to sound just a bit better and — mainly — to go just a bit louder.

There is a minor complaint that the 360-degree performance isn’t as smooth with the MegaBoom and MegaBlast as with say the Bose Soundlink Revolve and Revolve+ (which we compare here) — that is, the UE speakers sound a bit better from the front than from the sides.

The Megablast (and its smaller sibling, the Ultimate Ears Blast) easily stand out as the best-sounding of the smart speakers such as the Amazon Alexa Echo and Google Home. And it rivals the Apple HomePod, which is much more expensive and whose options for voice commands can be a bit lacking.

The UE Blast and MegaBlast feature Amazon’s Alexa which means that they are speakers you you can talk to and interrogate for information — as long as you’re connected to WiFi. But the Blast and MegaBlast lag much more than Amazon’s own Alexa products, don’t have a light to show that they’re listening, and tend to be more fiddly and prone to failure.

The UE Megaboom does not have full Amazon Alexa, but it does connect to Alexa as well as to Siri or to Google Now through your smartphone. This enables you to talk to your UE Megaboom speaker for speaker-related things, like skipping tracks, or playing a particular playlist on a supported service like Spotify. If you want to know about the weather/sports/news/settle a point of fact in an argument, you’ll have to instead talk to your smartphone, not your Megaboom speaker.

If you really want to talk to a great-sounding speaker, we think you’re generally better off getting an Amazon Echo Dot or Google Home Mini for their voice assistant functions, and connecting them to a MegaBoom and/or your home speaker system for actually listening to music.

A major downside of the Megablast is that if you buy two of them you cannot pair them together for more oomph, as you can with two Megabooms. The Megaboom is also lighter and a bit smaller, so there’s a convenience factor there too. And finally, the Megaboom has a speakerphone function, which the Megablast strangely lacks.

Boom vs. Blast Wrap-Up: Which UE Mega-Speaker Is Right For You? 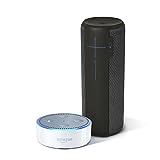 UE Megaboom + Echo Dot
Get the best of both worlds; the best Alexa experience and the best waterproof portable speaker of its size by connecting these two
Check on Amazon