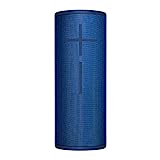 Logitech skipped a number in their branding scheme with this speaker (there never was an Ultimate Ears Megaboom 2), but that doesn’t mean that the Megaboom 3 is a giant leap forward. But a solid step in the right direction, definitely, both in design and sound.

For the last five years we’ve been recommending Ultimate Ears’ speakers for many uses, and among large, loud, waterproof outdoor Bluetooth speakers, the original Ultimate Ears Megaboom was a top pick.

So how much better does the Ultimate Ears Megaboom 3 sound compared to its predecessor? And do the few added features make much of a difference? Let’s dive in for a look, first in a side-by-side comparison and then with a meta-analysis of the critical commentary to date.

This article was originally published on October 2, 2018.

What Critics Say: The Megaboom 3’s Improvements in Design and Sound

We think the Ultimate Ears Megaboom 3 takes what was a great speaker and manages to find a few tweaks to make it even better. All of the major reviews from audio critics have so far agreed. We don’t think it’s worth upgrading if you have the original, but if you’re in the market for a loud portable speaker, the update is a great choice.

Ultimate Ears design changes may not seem to obvious in photos, but the newer Megaboom 3 does leave a better impression in real life:

Design-wise, it’s kind of like the rowdy teenager that was the Ultimate Ears Megaboom has brushed its hair and turned down its collar, but hasn’t stopped rocking out.

Features: Gained a Few, Lost a Few (Though not Important Ones, Thankfully)

Here are the features that the Ultimate Ears Megaboom 3 has gained compared to the original:

The Megaboom 3 lacks these features of the original:

It’s worth noting that both the original and version 3 run on the same dedicated smartphone app. This app allows for remote on/off, EQ customizations, using your speaker as an alarm clock, and more.

The app also lets you pair multiple units to create a larger party. It is possible to pair various older speaker models too; you can join together the Boom, Boom 2, Boom 3, Megaboom, and Megaboom 3 speakers in any combination.

Note that neither of these speakers is a “smart speaker”; you cannot give them voice commands. We actually prefer it this way, because after all the smart assistants on phones (Siri, Google Assistant) tend to be better. But if you want a smart version of these speakers, that would be the Ultimate Ears Megablast (which we compare to the Megaboom 3 here).

The Megaboom 3 has better, deeper bass and sounds better overall

As always, we go meta and like to take a wide survey of the comments from audiophile obsessives and tech critics. Here there has been very solid agreement on this speaker.

Top critics feel that compared to its predecessor, the Megaboom 3 has more solid and smooth delivery across the midrange, better stronger bass, more appealing and consistent treble performance. It is more “spacious”, “energetic”, “exciting”, and “fuller”.

In spite of the boost on the bass end, it is said not to sound overdone or harsh. Some commentators preferred to take the bass down a notch or two on the equalizer in the speaker’s smartphone app, while others took it up a bit.

There is general agreement as well that the 360-degree performance has been improved a bit, allowing you to place the speaker in the middle of a room or an outdoor party and sound great no matter which side of it you’re standing on. The original did this quite well too though.

The Megaboom 3 is without a doubt the better speaker, though the difference is marginal, so price may be a deciding factor.

Since these speakers sometimes have price swings, we can’t predict which will be a better deal for sure, but the boxes below show prices that are updated daily.

Also do click through to check pricing on different colors, as some of these are often discounted over at Amazon.