So when the company designed the very similar Ultimate Ears Blast we were intrigued. But we’re not ready to recommend it just yet for most people.

The Blast and Boom 2 from Ultimate Ears (a.k.a. UE/Logitech) are a bit taller, a bit thinner than the Amazon Echo (2nd generation). They’re also a good step up in terms of sound quality from Amazon’s own speaker offerings.

The UE Boom 2 has long been our most-recommended speaker for travellers as it fills a room or animates an outdoor party with even sound, excellent punchy bass — and yet is only the size of a tall beer can.

We’re far from the only ones who love the UE Boom 2; it has been at or near the top of lists of audiophiles, bloggers, and consumer testing organizations for a couple of years.

Does the newer Ultimate Ears Blast sound better than the UE Boom 2?

UE Boom 2
Check on Amazon
It’s debatable; some listeners say yes, some say no. Most professional critics who listened to the Ultimate Ears Blast and compared it to the UE Boom 2 felt that they were not quite identical, but very similar in sound. Both excel in providing quite a bit of separation and soundstage for such small speakers, and have powerful, punchy bass ends.

The UE Boom 2 has just a bit more bass to some critics’ ears, whereas the Ultimate Ears Blast is just a bit more evenly balanced. Both handle well at top volumes. To sum up, they’re both excellent speakers for their size (also nearly identical), and there’s there’s not enough of a difference to base one’s decision in this area.

They also both excel at providing 360-degree sound; they’re designed to be placed right in the center of the party and sound lovely no matter where around them you are standing/busting your moves.

Do note, however, that you can definitely get better sound by pairing two or more UE Boom 2s (not possible with the Blast).

Are the Ultimate Ears Blast’s “smart speaker” features worth it?

Ultimate Ears Blast
Check on Amazon
Initially many users have complained of some fiddliness with the smart features of the Ultimate Ears Blast — we suspect that this may be ironed out eventually with firmware upgrades. There are minor complaints about poor voice recognition and the lack of a “listening” light cue to show that the unit is paying attention to your voice.

If you are looking for this mainly for the smart speaker features, we’d suggest the Amazon Echo instead. 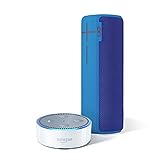 UE Boom 2 + Echo Dot
Or, even better, purchase an Amazon Echo Dot for the smart features and pair it to your UE Boom 2, which is the more fully featured portable speaker. Or pair the Dot to a home speaker system for the really top-level sound that only a larger system can provide. If you’re more in the Google universe, you might opt for the Google Home Mini instead.

Note that the UE Boom 2 does itself offer some basic integration with Alexa as well as Google Now and Siri; you can speak to it for music cues like skipping tracks or launching a playlist (but not to ask for stock quotes, do your shopping, get information…).

Link up multiple speakers: A major advantage of the UE Boom 2

UE’s mobile apps (for iOS and Android) allow you to link various up to 150 UE Boom 2s (as well as Megabooms or the original UE Boom) to create a much larger mobile party.

The Ultimate Ears Blast (and Megablast) unfortunately lack this feature.

We see this capability as a major advantage for the UE Boom 2. Using two UE Boom 2s together allows you to create true stereo sound, or to simply link up friends’ speakers as the size of your gathering increases. It’s an easy way to have much better and bigger sound while on the go.

Other features of the UE Boom 2 and Ultimate Ears Blast

Both speakers are incredibly well-built small cylinders whose customers report have tolerated lots of drops, dunks, and other abuse. The Boom 2 is IPX7 rated, which means that it can be underwater for up to 30 minutes with no ill effects. The Blast i 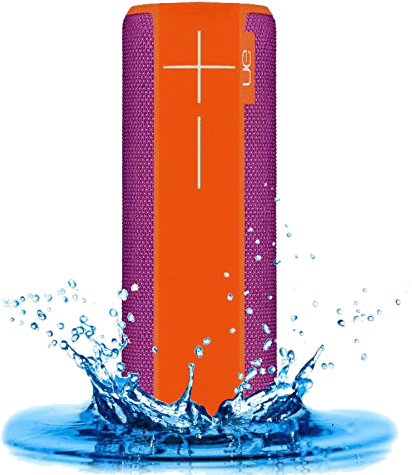 s IP67 rated, which means that in addition to the same waterproofing, UE is guaranteeing it to be dustproof as well — completely sealed against foreign particles.

At 15 hours for the UE Boom 2 and 12 hours for the Ultimate Ears Blast, both go quite a bit longer than any party I’d throw. If you for some reason need even more long-lasting tunes while off the grid, consider our comparison with the Fugoo speakers, or just buy an external USB battery, which can recharge your speaker, phone, and other devices several times over.

3" Locking Carabiner Black - 5 Pk
Both speakers allow you to either hook them to a backpack or a tree with  a standard carabiner, or else mount them on a tripod. 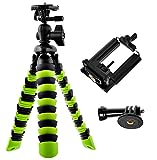 Bontend Flexible Tripod with iPhone and Smartphone...
You might not think you’d put a speaker on a tripod, but it’s quite a convenient way to set it up in the middle of an outdoor party. We especially like to repurpose flexible, claw-grip tripods for this purpose.

The UE Boom 2’s speakerphone function works great for calls, both for hearing and being heard.

The Ultimate Ears Blast does not have a speakerphone.

Ultimate Ears MEGABOOM (2015) Portable Waterproof...
Check on Amazon
Such is the basic law of speaker design that, all else equal, a bigger speaker will generally be able to give you better sound, especially on the bass end and in terms of soundstage.

We also have a full comparison of the UE Boom 2 vs. the UE Megaboom for those who are vacillating between the two size options.

While Ultimate Ears provides hands-down the best rough-and-tumble, waterproof portable speakers, if you’re willing to sacrifice a bit more on portability and durability, we think the best-sounding large Bluetooth speaker overall is the Marshall Kilburn.

U.E. Boom vs. Blast Wrap-Up: Which Is Right For You?

UE Boom 2 plus Echo Dot
This pairing offers the best of both worlds; the best-sounding small Bluetooth speaker and the best full Alexa smart-speaker experience
Check on Amazon