In the hundreds of speaker reviews and comparisons we’ve done around here, it’s often easy to choose which to recommend. Comparing the JBL PartyBox 100 vs. Ultimate Ears Hyperboom presents a more difficult choice however; it depends on your outdoor-dance-party priorities, and even then it’s not so clear-cut.

To be blunt, the JBL Partybox 100 sounds a bit better. But they’re both great, and Hyperboom has some advantages in terms of features and could be better for home indoor use in particular. We’ll dig into our opinions, a meta-review of other audio geeks’ crazy takes, and the keys that could help you dear readers decide, and find these speakers for cheap. But first up, a quick side-by-side comparison for those who hate to read a lot.

This article was originally published on July 25, 2020.

The Ultimate Ears Hyperboom won’t disappoint the fans of its more portable, bottle-sized and -shaped speakers (the Boom 3 and Megaboom 3). The same punchy, even mix is there, but it’s gotten much bigger with the Hyperboom and can fill a yard or living room with a truly enormous amount of sound. The many audiofile and tech critics to weigh in have lauded its high-end innards, with two of each tweeters, woofers, and radiators. The tweeters and woofers face forward with one at each angle to spread the sound out over a wide 180 degrees, and the radiators face backwards. Bass gets a nice boost from them if the Hyperboom is placed against a wall, and either way has a lovely dynamism. The top end is sweet and rich and the mix is smooth across the board, with some sense of soundstage. There’s no distortion at top volumes.

Nobody has come away too impressed with the Hyperboom’s “adaptive EQ” feature, through which a built-in mic supposedly senses the room’s dynamics and adjusts the EQ accordingly. Fortunately, the Hyperboom has a dedicated app that lets you adjust the EQ according to your tastes and whims on the fly. 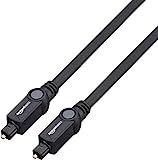 The Hyperboom is small enough that I’d take it outside for a party, but stylish enough that it can disappear into my living room. For indoor use, it’s nice that there’s an optical input for connection to a TV or game device via an optical cable (unfortunately not included).

The JBL PartyBox 100’s Pros and Cons: Bigger Sound, but More to Carry 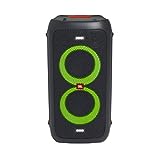 You’ll definitely hesitate a bit more before taking the PartyBox out for your picnic; it weighs about half again as much as the Hyperboom at 21 pounds / 10 kilos. But it delivers enough oomph that once you’re out there, you’ll be glad you did; most audiofile reviewers like it and it compares favorably to the excellent JBL lineup.

The JBL PartyBox 100 easily wins out over the Hyperboom in comparisons of sound. It goes louder and sounds better at top volumes, with bigger, more natural bass thumping and mids and highs that can ring out truly even at big distances outdoors. It offers excitement enough to power large parties, indoors or outdoors. To some ears it is not quite as smooth as the Hyperboom, though to many it is punchier and more dynamic.

The JBL PartyBox 100 is more directional than the Hyperboom, with the tweeters and woofers facing straight ahead. It is meant to be used either vertically or laying on its side, and has a mount for a speaker tripod pole.

As we mentioned, it lacks the Hyperboom’s water resistance, in-app EQ, and optical cable connection.

Where it beats out the Hyperboom in terms of features is the JBL PartyBox 100’s dual inputs for mics, guitars, or other instruments, along with gain control, so that you can do karaoke or play along with your music. Or you can simply use the PartyBox 100 as an amp for informal one-person concerts, or as an excellent portable PA system.

If you’re willing to carry it around and don’t need water resistance, the Partybox 100 is the better speaker, particularly if you’re likely to take an outdoor party really loud. And if you want to stick with JBL but get a completely waterproof party speaker, check out our comparison of the JBL Boombox 2 and Partybox 100.

But the Hyperboom is no slouch; it goes plenty loud for most outdoor uses, and its battery lasts longer. So oof, yeah, it’s not that easy to decide.

Oluv, a sardonic, heroic, long-winded audio critic, made a one-hour video comparing these two speakers; if you have an extremely good set of headphones you can supposedly listen for yourself (or just skip to 53:45 for his take). At the end he wonders whether anyone is still watching, but says that he wants to put both speakers under yet more testing. The quick version: the Hyperboom is “not exciting” and the PartyBox 100 is very much so.

Wrap-up: Choosing JBL or Ultimate Ears for Your Outdoor Party Needs, and Getting a Good Price

JBL Partybox 100
Goes louder and sounds even better at top volumes to rock even bigger parties, has mic and guitar inputs, lights up with bass (optional)
Direct from JBL Check on Amazon