We’re generally fans of small, outdoors-ready speakers and so were excited to see and hear the upgrade to the short, squat nearly pocket-sized original Ultimate Ears Wonderboom speaker, which was the best-sounding speaker for its tiny size, price, and super-indestructibility.

And the new Wonderboom 2 is absolutely an improvement over the original; as we’ll discuss below, it goes a bit louder and the bass end is a bit stronger.

Ultimate Ears BOOM 3 Portable Waterproof Bluetooth...
But do note that in a separate article we also have an upgrade recommendation if you’re willing to carry a speaker that’s just a bit taller and sounds even better than either Wonderboom 1 or 2: the Ultimate Ears Boom 3. It goes louder, offers more convincing bass and instrument separation, and otherwise generally has the same features as both Wonderbooms.

Regardless, for those who really want a speaker that’s super-small and able to withstand a lot of abuse, especially outside, either the Wonderboom 1 or 2 would both be excellent choices. We’re here to help you decide if the upgraded version is worth it, or if you should just go with the older version and save a few bucks.

This article was originally published on June 28, 2019.

An Overview of Ultimate Ears’ Update: How Much Better Is the Wonderboom 2?

Ultimate Ears Wonderboom 2
Check on Amazon
It’s been a couple of years since the original Wonderboom was released, and with all of the excellent competition in the Bluetooth speaker universe we’re not surprised that Logitech’s little speaker division, Ultimate Ears, would offer up an update to this outdoorsy, travel-friendly speaker.

We’ll first hash out the feature differences and then discuss reactions to the improvement in sound (and yes, there has been some actual improvement).

The Upgraded Features of the Wonderboom 2 Compared to the Original

Meanwhile, the following features remain the same in the Wonderboom 1 and 2:

Neither the Wonderboom 1 or 2 offer voice assistant integration; if you want a great-sounding smart speaker you can compare to the Ultimate Ears Megablast (you’ll see that we’re not huge fans of smart speakers in general though).

They also don’t have speakerphones, which is a feature that’s falling off of most Bluetooth speakers. Just use your phone’s own speakerphone function instead.

Ultimate Ears has made some actual, solid improvements in the sound quality for the Wonderboom 2. The basic profile is the same and the differences are not extraordinary, but they are tangible.

As usual, we don’t just offer our two cents but also survey the opinions of a wide range of tech reviewers and speaker snobs. The geeks and audiophiles who listened to the original Wonderboom generally put it near the tops of their lists:

Those who have listened to the Wonderboom 2 felt that it was also a high quality offering and shows small but definite improvement:

Speaker sound quality is almost always a tradeoff between size and sound quality; bigger speakers will sound better in general and usually be able to go louder. If you’re willing to carry something bigger, see our reviews of larger Bluetooth speakers.

Which Wonderboom Is Right For You, and Getting the Best Prices

The whole premise of this website is that we’re inveterate cheapskates, so we’re hardly out to recommend buying the latest thing.

If you already have the original, excellent model of the Wonderboom, we don’t think there’s enough of a difference that you’d want to upgrade to the Wonderboom 2. And if you’re looking better / louder sound, you can take a small step up in size to the Ultimate Ears Boom 3 (reviewed here), or a huge step up to the boombox-sized (ah, those were the days!) JBL Xtreme 2 (reviewed here). 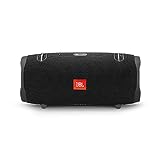 If you’d prefer a loud little bassy beast that fits in the palm of your hand, though, the Wonderbooms are just right. The original Wonderboom was loud, well-built, and sounded great. The Wonderboom 2 has a bit more bass presence and the outdoor mode is a genuinely useful feature. You decide if it’s worth the extra layout.

The prices below are updated daily from Amazon, but they can vary a bit especially by color. Click through to these listings and check various colors (especially red!) as there can be some surprisingly good deals at times if you’re flexible on that.

Ultimate Ears Wonderboom
Previously the best-sounding super-indestructible hand-sized speaker for outdoor use; grab two and you can pair them for double sound
Check on Amazon

Ultimate Ears Wonderboom 2
The update has a bit more convincing bass and goes a bit louder, especially in outdoors mode; get two and you can pair them for true stereo with left and right channels
Check on Amazon